At one point last night I woke up to the massive sound of a wave breaking, and I thought the ocean was coming up over our mini-dune and inundating camp. Then I realized the reason it was so loud: no rain. The weather report hanging in the Bark Bay cooking shelter had forecast continued rain for today, so I was surprised to hear a break. The break was soon over.

I sleep until 7:30 today, between the white noise of the precipitation and having no morning light. We only have 9 k to go before the low tide crossing, and the earliest we can attempt that is 3:45pm. Given the size of the rivers yesterday, we will probably aim for the trough of the tide at 5:15. Which means there is no point to leave camp for the rain and the sandflies until after lunch at the earliest. 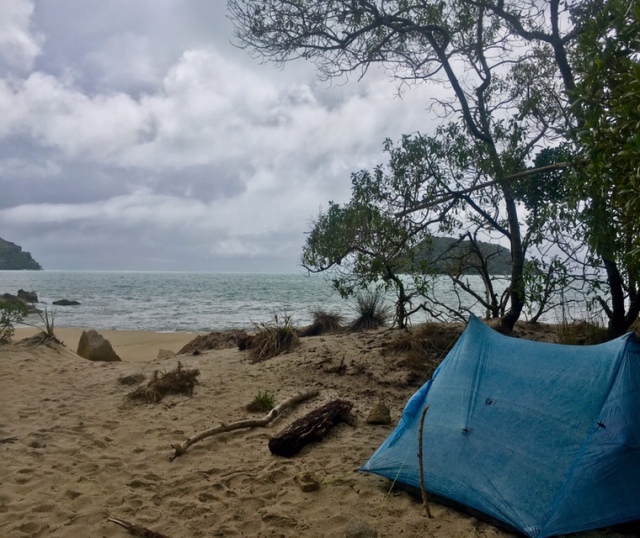 The rain patters on and off. I make coffee and journal, Prana reads. Whenever the rain stops I get out of the tent and watch the waves on the beach, until the sandflies or the rain drives me back in. I can’t believe how tiny the creek behind our tent is this morning! Last night, it was probably waist deep if I had wanted to cross it; this morning, it barely covers the tops of my shoes. At one point we hear a deep voice over a megaphone above the booming surf. “That’s weird.” “Do you think it’s a warning?” I get out of the tent to see a large catamaran retracting it’s gangplank, like a spacecraft, after two hikers disembark. 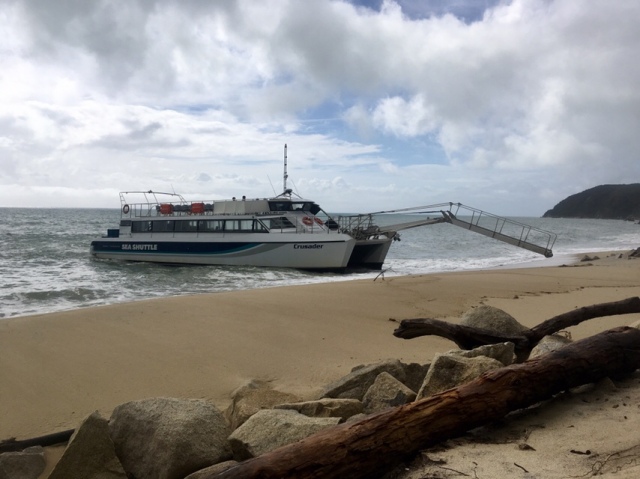 As noon approaches, we both get antsy, finally packing up and eating lunch. Prana spies an arch in the beach cliffs, and I go investigate a small cave tunnel that goes back about 40 feet.

On the track there is little trace of what it was like yesterday. A few clogged drain ditches hold standing water, a few divots in the trail showcase shallow puddles. No hint of the romping racing aliveness. It’s like the quiet recovery morning after the best dance party ever. In 20 unremarkable minutes we make Onetahuti Bay, and walk the sandy beach to the dark river at the far end. Last night we were warned it was waist deep at low tide from storm runoff. It is now deceptively shallow, and after cautiously splashing across the high-tide knee deep channel, follow a new boardwalk into the estuary.

We wind through a variety of reeds, grasses, and marsh-loving plants before climbing the hills cradling the swamp. As we gain elevation, the full depth that the wetlands extends inland is surprising.

Looking out to the ocean, there is a strange muted band of tan water next to the coast. I assume it is shallows, but Prana points out there are several massive rivers pumping muddy water out there. The sediment extends much farther than I would have guessed.

We stroll along a lovely path, mosses and ferns lining the way, some of the tiny patterns quite striking.

Eventually we catch our first glimpse of the Awaroa River far below. It looks intimidating from this vantage point, but I remind myself of how the dark water had distorted the perception at the first crossing today. 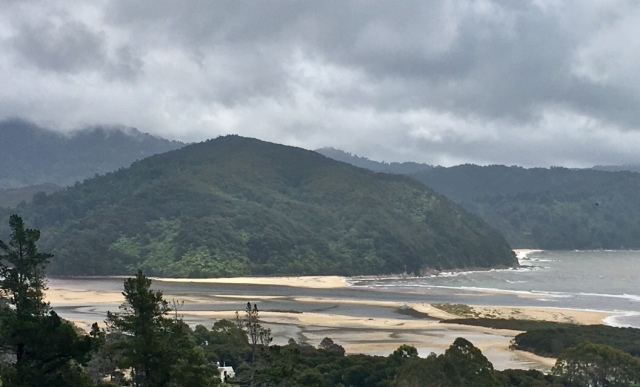 We eat some rice cakes and descend down to the bay. We arrive at the very beginning of the crossing window, and take our time finding the cooking shack for filtered water. It’s one of the nicest looking large campsites with clean grass. Another couple is shouldering their packs. “We are heading down to see if the river has come down,” they tell us. “This morning we turned around when it got to our waists.” We drink some electrolytes and follow suit.

It is not too bad at all. It’s a wide crossing, but never gets deeper than mid thigh on me, and that’s being careless. With an hour to go until lowest tide, it would probably have only been calf deep. The sand is alive with small scuttling crabs; we laugh at them as we alternate walking in river braids and on mud flats, towards a giant orange triangle that is our beacon on the far side.

The other couple is changing their shoes and drying their feet, and explain that a ranger escorted a small group across this morning, but most people that had hoped to cross just took a water taxi off the trail and back to town last night. Why? I wonder. What was better to get to than just camping here until the morning?

Prana and I are scheduled to camp at Totarunui, a huge vehicle campground with a small walk-in tenting area. The next designated campsite was booked full, and we couldn’t guess if the next one after that would be too far to goafter our evening estuary crossing; so we accepted Totarunui. We climb into the forest, and descend to Goat Bay, a beach with beautiful sculpted granite boulders. The forest behind the bay is filled with wise leafy giants, and of palms. We wind through these, and up, until we reach the overlook of Totaranui Beach, a long, curving, golden crescent. “Maybe we can find a warden to switch campsites?” I suggest, surveying the number of vehicles in the campground below.

There is no warden to be found, but the campground is pleasantly compartmentalized and surprisingly quiet. 6:30 now, two hours to the far campsite that still had space when we booked…we weigh the options and decide to just stay, which brings a feeling of relief. I don’t know why I’m so hard on myself about being happy with a short day.

We pitch the tent and Prana goes to cook an untested dinner recipe in the shelter while I journal. I am so hungry because I skipped my last snack in case we went further and I needed it then. I waver, then polish it off right before Prana returns with a massive dinner filling the cookpot to the brim. It is: orzo, red lentils, and potato leek soup mix. I thought this portion would barely suffice! We have no trouble finishing it, and I am plumply sated.

I want to journal more, I really do, but I am so full and the ocean is just past the forested dune, rushing in a rhythm that sounds like that deep even breathing one listens to when someone they love has fallen asleep before them, and I drift.