A warning to any contemplating staying at the Pahia ‘Top 10’ HP- it is top ten for legitimate Internet connection (+1) overpricedness (-5) and obnoxious noise (-17). Total score= minus 16. Skip it, and stealth camp within the 1 k after. There are plenty of spots if you are not picky and you are fastidious about stealthing.

None of us slept well last night for one reason or multiple: too much noise, too much moonlight, too many Sandfly bites, not enough walking. We are up at 5:15, as the high tide is needed for the boat shuttle we have chosen. The interesting thing is, our trail just ends on the map, at the water on the edge of Opua. On the far side of the bay, tucked up at the head of one of many inlets, it simply begins again. Any other place that there is a ferry or canoeing section, the line continues. But here, is a chasm in the trail. A find-your-own-way hole. I suppose it’s done that way to give the hiker permission to solve it however they choose.

The first section of walking continues along the coast and is beautiful. The cloudy light of the morning plays an entire continuum of subtle color in the water. A series of boardwalks lead through a forest of mangroves. The walkway becomes a narrow ribbon hugging the coast, revealing long glimpses of the bay, the ocean, islands moving in and out of the mists. There are small shuttling boats

pulled up above the high tide line, tangles of garden draping down the cliffs, and a perfect hammock spot. 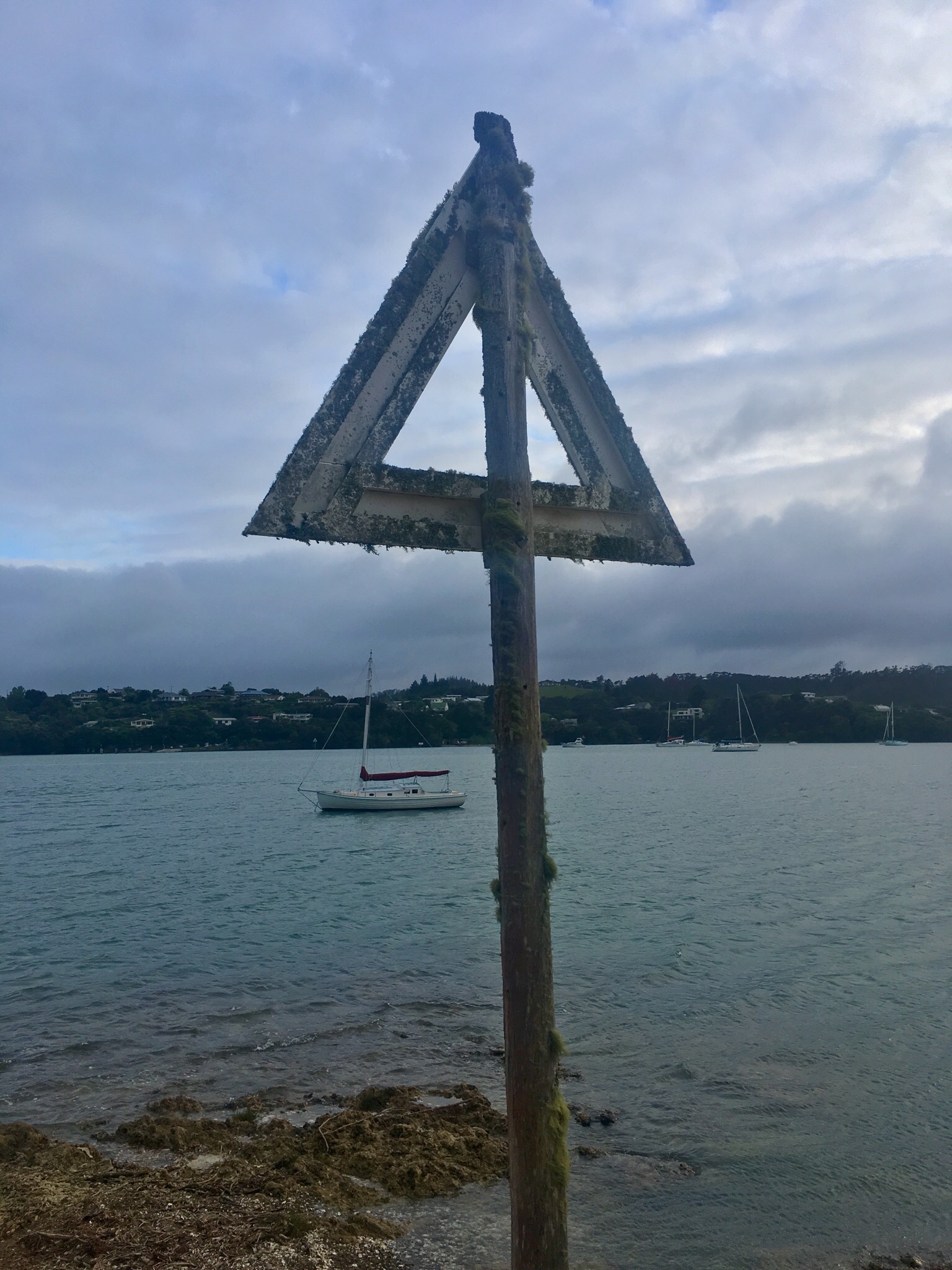 We reach the Opua store about 15 minutes before our 7:45 rendezvous with the boat. Most of us duck into the store for either coffee or breakfast pastries. At 7:40, our captain pulls up to the dock. He stows our packs and directs us onboard. “I’m Maori, so I feel I should welcome you in the Maori language.” He lilts for several minutes in that lyrical language. “I basically just said welcome, nice to meet you, and that I was going to take you across the bay,” he translates. “Maori greetings can go on and on, sometimes they can last three days. I guess they could even last, have lasted weeks.” He pauses. “Part of the greeting is usually a song. Before the Europeans arrived, we had no word for forgiveness. It wasn’t a concept in our entire language. So, when we would visit and receive one another, we knew that living so closely, there would of course be offenses. There was no way we could not offend one another somehow. So the songs talk about how we don’t intend the offenses, whatever they are, whenever they happen. Sort of acknowledging the inevitable before it can be taken personally.” He sings for a few minutes, something heartfelt, in a beautiful full voice. “It means, oh my darling, come rest your head on my chest, and I will hold you and take care of you forever, you will never want for anything. Something like that.”

I am amazed, so grateful that he is sharing this with us. Whatever wishfulness I had felt for kayaking instead has completely evaporated. These few moments were priceless. “Now your turn to sing something to me,” he requests. Parker comes up with a several-line simple song about crossing the bay on the spot.

The greetings complete, our captain turns to the business of getting us across the water to the start of the trail. He motors out and opens up the speed, zooming out of the main deep part of the bay. We pass many boats at anchor, One named The Dawn Treader, which thrills me. We pass several floating sheds, or clubhouse looking building on docks. “Oyster barges,” our captain points out. “They dredge for the oysters and then shuck them on those floating stations.”

Within a half an hour, the waterway starts splitting, framed into smaller and smaller channels by denser and denser stands of mangroves. We pass a TA marker seemingly inexplicably out in the middle of the water, the orange flashes just barely above the surface. 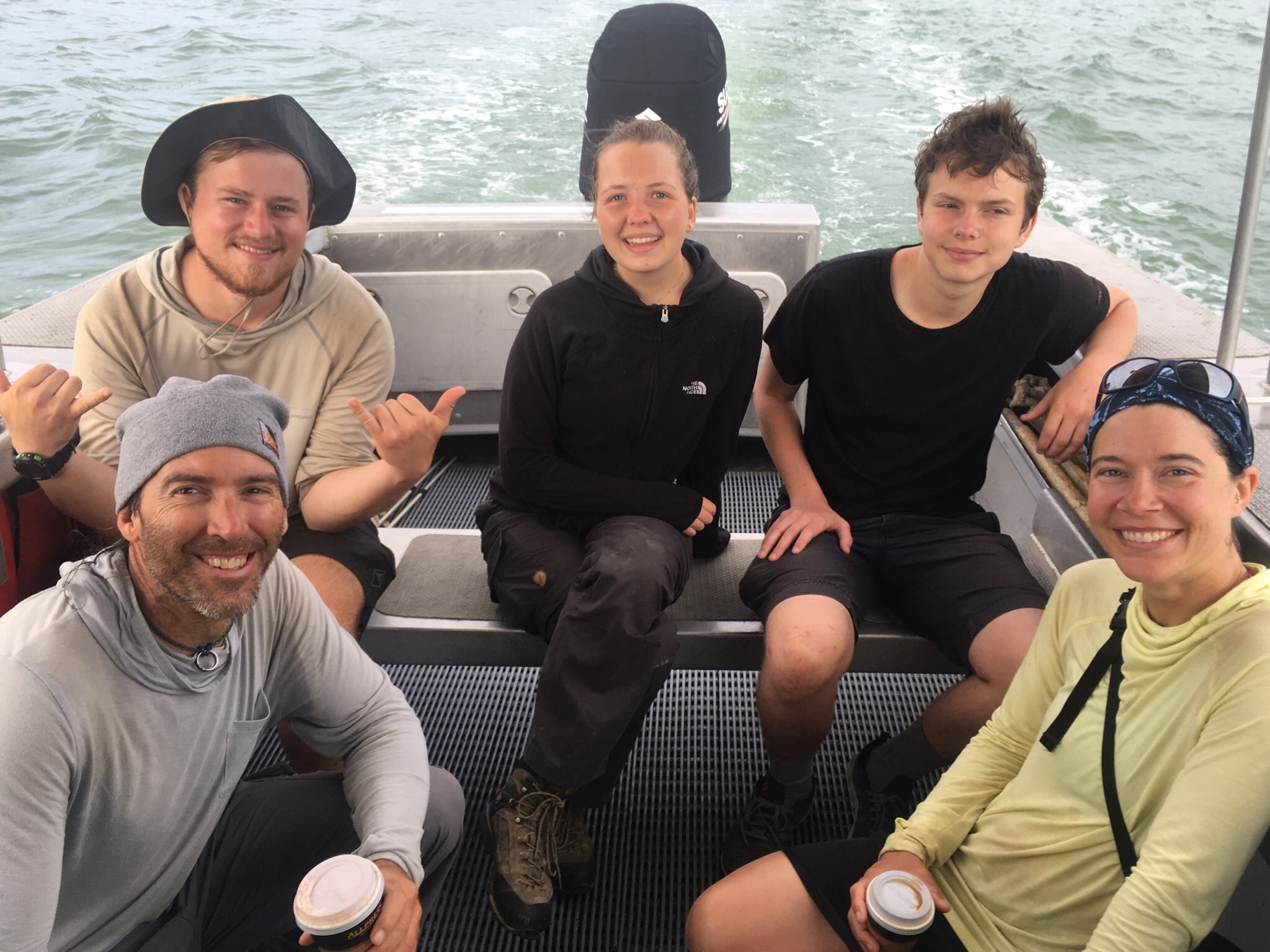 Our captain slows and raises the motor, barely creeping forward with the propellor skimming the surface. There are a few gentle clunks and jostles against the hull of the boat. “Whew, shallow here.” I have no idea how he keeps track of where we are in the identical branches of the clear water lanes twisting through the dense mangroves. (Is a group of mangroves still a grove?). But he does, and after another 15 minutes bumps against a makeshift dock that is really more of a vertical embankment.

We disembark and thank him. Apparently Maori goodbyes can last just as long or longer than the greetings, but he is on an overbooked schedule today, and wishes to get as close as he can to meeting it, so he simply wishes us well and good walking as he carefully turns the boat around.

We follow roads for the first part of the day. Horses in and out of their fences munch away at their lunches. The road winds through a quiet neighborhood with laundry on the lines and flower vines spilling over onto driveways.

We arrive at the turn off into the Papakauri Stream. After a few feet of obnoxious side-hilling, we slide down into the creek. It’s much prettier and more efficient to simply splash down the stream.

Several hours of this go by, this beautiful, soothing, absorbing, meditative slow motion push. The water is cold but not frigid.

Occasionally someone from the group gets lured up a side trail, falling for the deceptive idea that it will be easier walking than in the water. The pioneer of the moment is invariably forced back down into the streambed. We have lunch on a cobble bank before abandoning the waterway and ascending to a meadow filled with buttercups, sporting an open shelter with benches under a roof. Even though it’s so early in the day, barely noon, the day feels long and late, and this meadow is too idyllic to pass up, a peaceful drowse-inducing eddy in the downstream momentum, and so we decide to stay for the rest of the afternoon, and to camp.

I hoop for a bit, Parker and Mikkel make a fire after napping. Ellie and Prana read, I write. It is perfect.