Bizarrely, a van arrived and parked in our campsite in the middle of the night, made a bunch of noise with their headlights on bright, and drove away. I put in earplugs, but apparently they came back and kept Prana up a big chunk of the night. I absolutely loathe paying to camp in town.

I wake up refreshed however, and get up to write. It’s a cold cold morning, and I am again grateful for the couch next to the wall heater in the common room. Eventually Prana wanders in, and we plan the day: breakfast in town, then hitch, then 22 k to the second hut. We pack up everything, and I leave an objectively-factual note on the offending van’s windshield, still parked in our tent site, barely resisting the urge to knock loud and hard on the window. We say goodbye to Margaret, and walk to the Fat Duck for breakfast.

Their breakfast is amazing- a delicious eggs Benedict with smoked salmon, and a plate of avocado with poached eggs, fresh greens, tangy tomato relish and gooey Parmesan hash brown cakes. A berry smoothie for me and a chai latte for Prana. We finish off the rolls and honey and fresh fruit left from our holiday park groceries, and are adequately satisfied. Hitchin time! I am so confidently looking forward to this! I don’t know what changed from a few weeks ago, but I feel like hitching will be no problem.

2 hours later, we are still on the side of the road on the east edge of town. Damn! I was so certain that just believing in it would be enough.

I am determined to maintain a good mood, even if it kills me, so I joke and try to make a game of interacting with the drivers. We have no sign this time, lulled by the ease of the last several hitches, but eventually Prana writes ‘To Trail’ on his sit pad, since it is a reusable phrase. Then I write ‘Only 25 K!’ along my arm in permanent marker in the largest letters possible. Then Mouse picks a bouquet of wildflowers and brandishes them at each passing vehicle as an offering. Still no takers.

I am determined to not lose faith, and my babbling of jokes reaches fever pitch. “You’re manic right now,” accuses Prana, but he is hauled out of his grouchy mood a bit, and so it doesn’t matter what he thinks, it’s working. An old, slight, dapper man walks by and encourages us, “You’ll get there eventually.”

Eventually we do. Of all the large cars that pass empty, and small cars that pass empty, and large cars that pass full (but not that full), it’s a tiny silver car with two occupants being aggressively tailgated that takes the time to pull over, circle back, and juggle all of their luggage to the trunk so we can squeeze into their backseat. They are a Netherlander and a German, perhaps tying Germans with New Zealanders as the winners as our overall hitching patrons. I’ll have to have an official re-count at the end.

They generously drop us at the spot Paul picked us up, and we resume our trek: only 8 days left, including today, if we keep the itinerary we have planned. In no time we cover the graveled distance to the first hut, where most of the other hitchers have stopped for the day in spite of the early hour. Even though we are likely out of time to make the next hut, we will camp part way instead.

The trail morphs back into the forest version of itself- mud, bogs, roots, erratic and steep up and downs. This forest is quite beautiful, though, and it is satisfying to be moving through it, in it, amongst it again, perhaps only in counterpoint to the last few sections. There is something about the quantity of ferns, the variety in the age of the trees, the richness of the moss, the quality of the light, that is enticing, engaging, immersive. 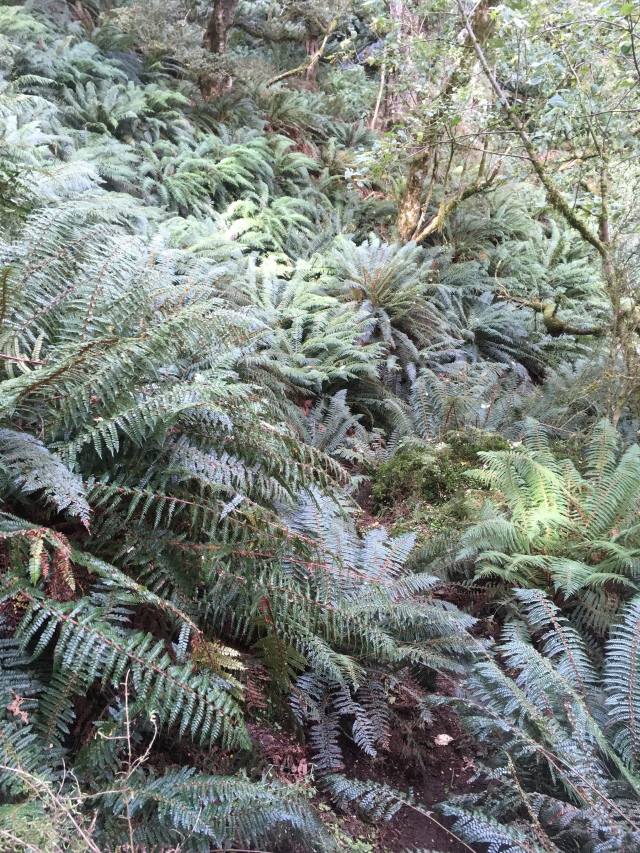 The going has slowed, but I don’t mind. I listen to a few political education podcasts, and then start an interview of Cheryl Strayed by Tim Ferriss. Pure magic 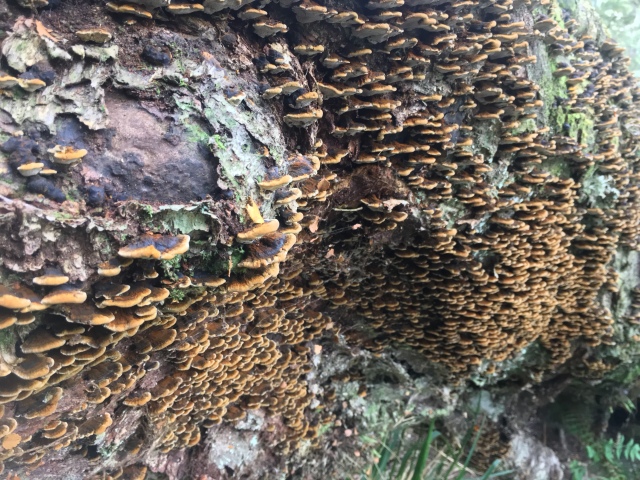 We reach the edge of the forest and tussock unfurls in front of us. There are several lovely campsites tucked under the spread of the beech branches, on flat moss before the towering grasses take over. Alas, it’s too early to stop. We start moving from one trail marker pole to the next, stopping at each one to reorient and spot the next one, which is very difficult when the marker is shorter than the neck-high tussocks. Once found, to move toward it requires a combination of probing footwork, keen searching for traces of others’ passage, and a constant motion with the arms similar to parting beaded curtains. Occasionally there is a gap in the draping plants wide enough to see, and this usually signifies a bog hole.

At intervals the trail leads up onto ridges and the pathway weaves through small wiry plants and silver mosses. Strange rocky cliffs and protrusions appear. The wind picks up as the light grows long, sending the tussocks rippling in the wind. The pattern of their waves makes them look as if they are marching, row upon row, to somewhere, with purpose. I love to indulge in the optical fantasy that they are animals somehow, and it’s just the crown of their heads sticking above the surface, luxuriant manes billowing in the wind.

At last it is getting late enough we need to look for camp, but the wind only increases, and we can’t seem to gain a sheltered aspect. Once we do, the flattest ground we can find is damp and severely pocked, so we compare our likelihood on the map of finding something better in half and hour and decide to make do. It takes some testing to find the least lumpy area, and once we are pitched on it, it’s time to eat fresh pasta and pumpkin soup. Luckily the tent is much warmer than the open air outside, and after a hot meal this campsite seems not too bad. There is a strange deep bark/snort sound nearby that my brain familiarizes as a dog; Prana insists it must be a possum, although that would be a big and quite sonorous possum; I realize later the only likely answer is a pig.

Wrapped in my sleeping quilt and liner, I wiggle around on my already deflated air mattress until I realize I can curl up quite comfortable in a way that places the lumps and divots exactly as I would place pillows. Surprisingly comfortable. I hope it lasts.