While my leg held up admirably well in the crazy footing yesterday, last night it took its due. I woke up at 1:30 and tossed and turned and tried not to wimper until the alarm went off 4 hours later.

I’m not a morning person, really, even in the best of times.

The climb out of the head of the canyon was gently switchbacked, on loose rocky soil, and at the top appeared 200 feet of well-made, newly cut tread- which promptly ended. Such toying of emotions.

The tawny ridgetop we followed slowly down was gorgeous, awash in the morning light, the sun squarely at our backs. Adequately poled, it was a jumble of volcanic stones and hummocky plants, purely wild, and there was not even a breath of wind. My heart soared with delight.

There was shockingly good cell service, from who knows where, and I was able to send my Mom some messages and pictures for Mother’s Day. Eventually we dropped off the ridge into a ravine, which deepened to a rocky gorge. Batton Pond held water, surprisingly, but looked just barely too thin to plow. We hopped down the canyon, with its dark chocolate and maroon bedrock, before realizing we’d lost the trail, which was actually far above us. We scrabbled up to find a white sand road. Yes! We strode without staring at our feet for the first time today, progress flying under our feet.

Green Tank offered water right on trail, unappetizing though it appeared. Could we make it another 11 miles this afternoon? We ought to, if the trail stayed good. If so, we could each get a couple of liters from here; if not, we’d get good water at Graveyard Wells, but add another 2 or more miles to our day. We decided we could make it; the Green Tank water smelled and tasted a little cow-y, but not the worst.

We descended on the road to an open desert plain, where dust devils were conjured from the ground, but we only skimmed the edge; then we were back up another draw into the mountains, and for a hopeful while, the track was good and the cairns were plentiful. But that faded, leaving steep up and downs over rocky route finding. Our pace slowed to a crawl.

A group of 15 elk spooked as we crested the shoulder of Coyote Peak. We took a break to watch them and to dry our shoes and socks, soaked through with sweat which had reconstituted the volcanic dust into a thick clay mask.

The volcanic rubble crawl continued along a broad, tawny ridge, into the blindingly angled setting sun, and crossways to the raging wind. A set of power lines whined eerily in the gale, making sounds like a possessed tuning fork. I tripped more and more often, stubbing my toes, turning my ankles, twisting my knees. How were the miles coming so painfully slow? I struggled with working unendingly and still falling short of simple goals. I wished that Prana wasn’t around, that I was hiking alone, so I could howl my frustrations and exhaustion into the sky, roar back against the wind without another person present who would spectate and feel compelled to respond; so I could release the negative emotions that conspired and overwhelmed me at the end of the day; I was using precious energy to hold them in and squash them and appear civilized, energy that I could be using to keep struggling forward.

I ground to a halt behind a tiny juniper, desperate for any psychological reprieve. Prana hugged me, which to my dismay dissolved both my defenses and my resolve. He hiked uphill another 20 feet. “If you’re ready to camp, there’s a good spot here.”

I joined him, and it was literally perfect. A squat, spreading juniper with an alcove in its thick branches blocked the wind from the west; a fledgling ponderosa blocked the erratic gust from the southwest and offered a token roof over the tuck-in. It was perched on a false summit that offered a 180 degree panorama, and it didn’t even have many rocks to move. I collapsed in utter relief and gratitude, took off my sodden, mangled shoes, put on both of my puffies, noticed the twilight pastels coalescing in the sky, and was flooded with joy. There was full cell service, usually not something I wished for, but I got a second chance to call my mom for Mother’s Day, and we all chatted on speakerphone over dinner. 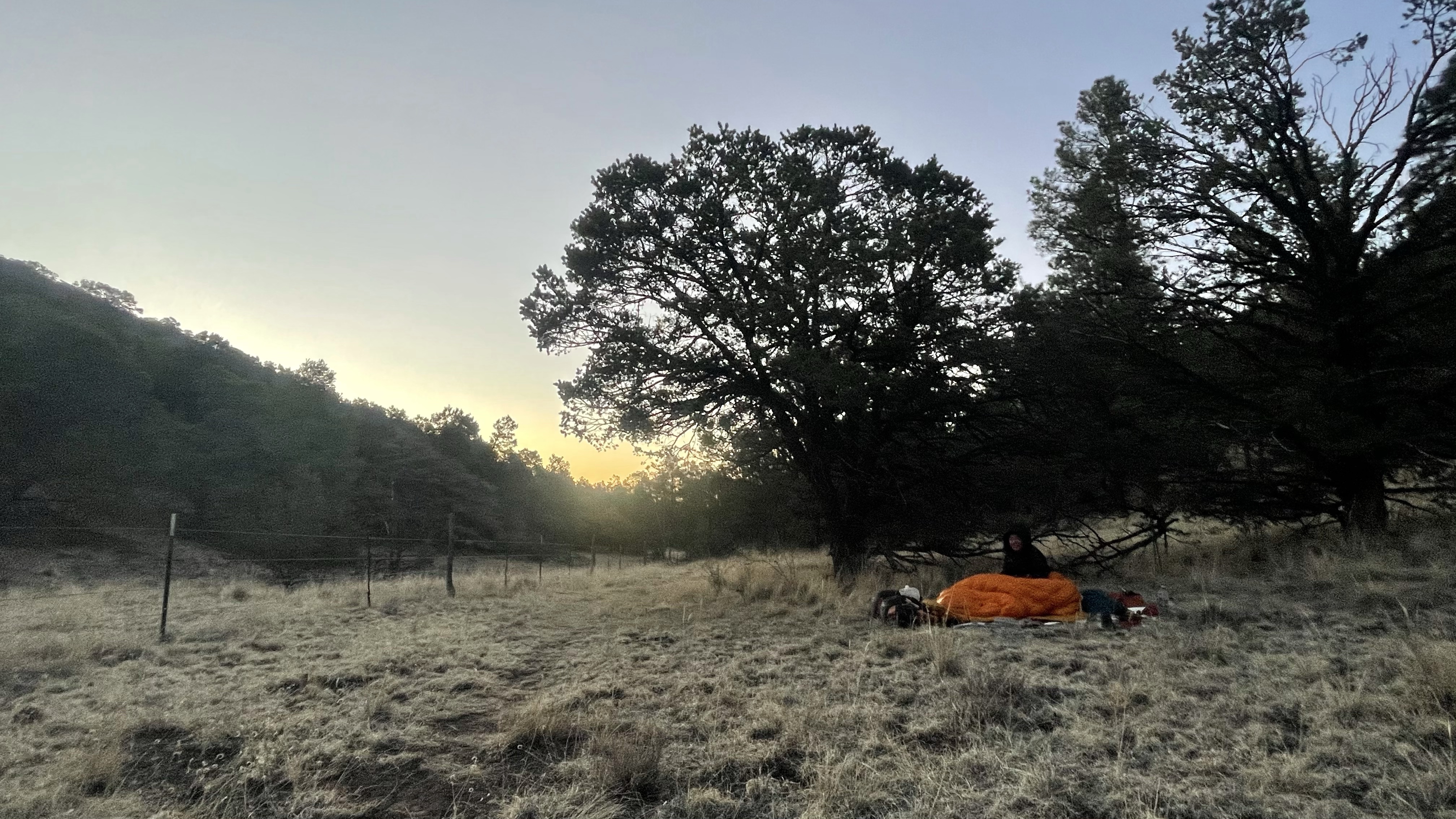 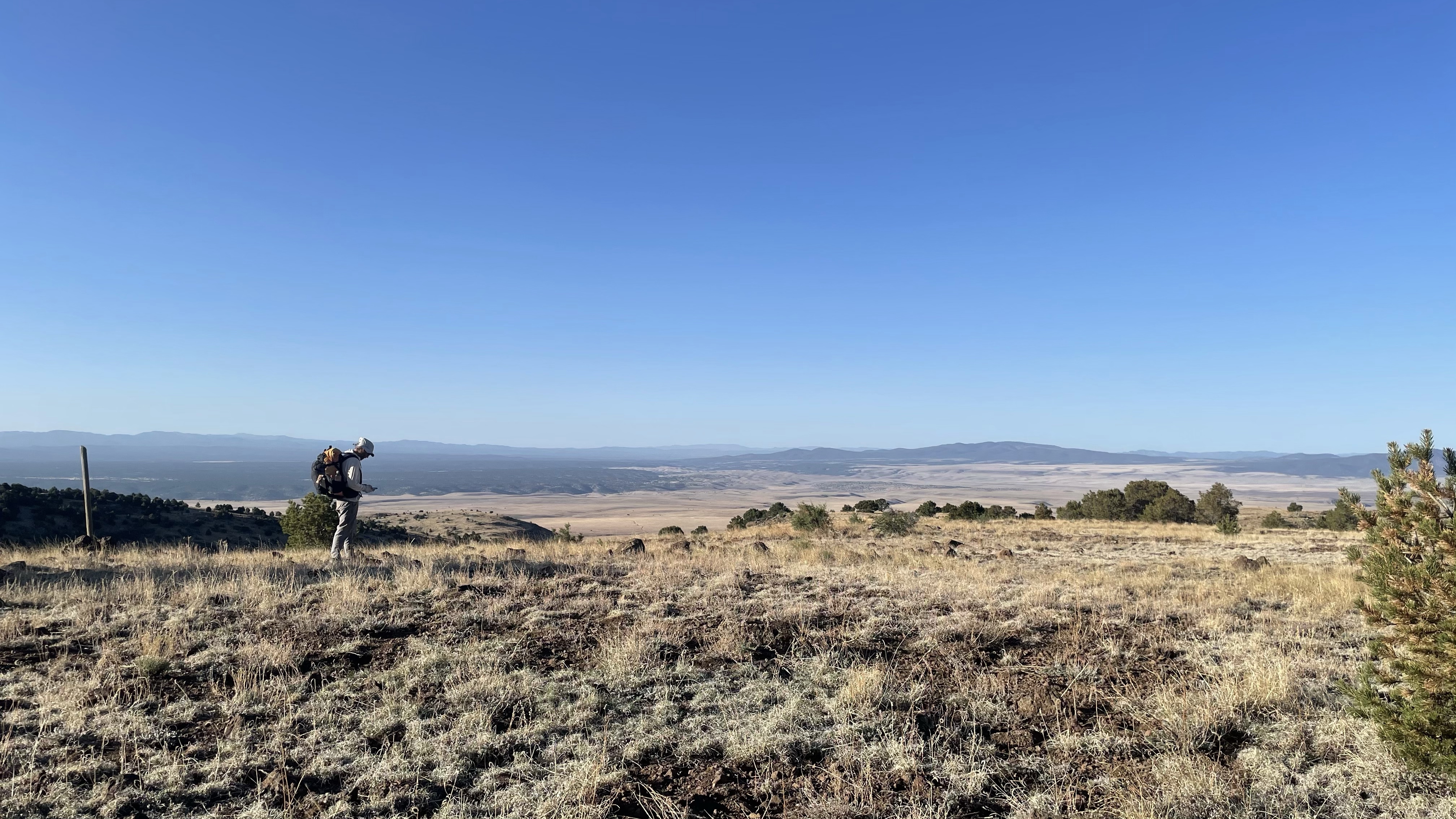