We packed two days of food in our pack, a little water, ate pie for breakfast, agreed on the night’s meeting spot, then departed the van site. 35 miles of road faced us before we would set foot on trail again; unfortunate, but luckily it was mostly dirt. Crusoe would meet us to camp on the road about 22 miles up.

I felt great today – “The Secret to Life is Lard” a sign had proclaimed at the pie afe, and if that was true, I was going to have to start packing it in my resupply boxes; but then again, I suspected it had something to do with being specifically in pie form. The miles flew quickly in a nice, regular rhythm. The serrated skyline of the Sawtooth formations stood proud behind us at the top of every rise. A grader pulled in and began re-gouging the ditch on the road we were walking, passing us at a comically slow-motion speed. Realty signs tried to cajole us into moving to Pie Town.

The figure of a hiker appeared in the far distance, and we slowly closed the gap. “I think that might be Pro!” I said. As we drew closer, we saw it was indeed. We matched our strides and spent several hours chatting as we neared the TLC Ranch, Pro’s destination for the day. He’s got a good eye for wildlife, and saw something run across the road ahead of us; when we reached the spot, a small, dark fox was still sitting amongst the junipers where it had darted.

At some point several texts landed from my friend Vince, who is an extremely excellent and random person, and who had been on a road trip to Yosemite before accidentally spending a couple of weeks in Santa Fe. “Where to backpack in NM?” he had asked a few days ago. “Middle Fork Gila,” I had replied. “I’m heading to the Gila, where are you?” he asked today. I sent a GPS pin. “It’s 4 hours further if I come find you guys on the way.” “No worries,” I typed back, “whatever you want to do. That’s a lot of extra driving.” “Aw, fuck it, it’s my birthday,” a text returned, “I’ll see you guys tonight.”

We passed an old stone and mortar homestead, and arrived at the TLC ranch, a home that offered water to hikers, and often food. We filled our bottles, accepted invitations for a lunch of rice and beans and burritos, and said our goodbyes to Pro- the math said this would be the last time we would likely see each other for while, if we even saw each other again on this hike. Then we redoubled our pace in the road.

Crusoe had asked us to let him know what condition the road was in, after his epic decommissioned highway adventure of a few days ago, and we made a big game of all the ways to mess with him. A truck (the same truck?) kept hauling heavy equipment and very unique campers back and forth on a flatbed through the sandy sections, but other than the washboard, the road was in good shape, as far as BLM desert roads go.

The sky had been mercifully cloudy all day, but the now the clouds darkened, the wind whipped, and it felt inevitable rain would fall. My brother’s van bumped toward us from the north; he’d apparently passed us while we were at the ranch, and couldn’t figure out why he hadn’t seen us. He launched into all the camping options he’d come up with, which frazzled my brain; I didn’t really want to be driven off the trail and be dependent on a vehicle to continue in the morning, and I didn’t really want to stand in the road with my pack on and have a sudden strategy session. He sensed my overwhelmed ness and said he’d see what he could find near our meeting spot.

Not long after a text came that he’d found a spot a little farther along, “a perfect little place without cow shit. It’s only 4000 feet past road A019.” Ha ha, tricky, as if he didn’t think I’d realize 4000 feet was almost a mile, and A019 was over a mile past our meeting spot. Such is one of the vast differences between being on foot or being in a car. Oh well, might as well walk while the walking was easy. “And by ‘perfect’ I mean ‘it’ll do’” he amended.

We found the van tucked behind a few scraggly trees as more raindrops splattered down. A little searching offered a slightly sheltered spot for our tent; but once we had it pitched, the wind reversed direction. Oh well. We piled into the van while Crusoe finished his broccoli /potato /duck egg skillet masterpiece, and I tried all the repairs I could figure out to get his MSR stove and pump working again.

Around 8:00 I spotted Vince’s conspicuous Black Scion on the road. I jumped out and waved him down; the rain started again as he unloaded beer and we all piled into Crusoe’s van. Last time Vince and Crusoe saw each other, Crusoe was just a kid, so it was funny seeing them recognize each other. Crusoe busted out a simple circus card game he’d found somewhere, beers were opened and toasted, and much laughing ensued. The game was really secondary to all the other catching up and talking going on, which was rather uproarious, as all of us except Prana were predisposed to getting loud when we got all wound up. I looked around the circle, so acutely, overwhelmingly grateful for the gift of vaccinations, and the return of this normality I had taken for granted two years ago.

Suddenly in the middle of one guffaw of laughter, from directly outside of the van, inches away, came a “HEE-haw, HEE-haw, HEE-haw, HEE-haw!!!!!!” We all stared at each other, and Crusoe opened the door to the sound of hoofs galloping away into the dark. What the heck? Was that a donkey? A donkey playing ding-dong-ditch?!

Vince pulled out a tiny bite size pumpkin pie from Walmart. “I love pie so much better than cake, so I brought a birthday pie.” We all looked at each other, called his one-bite pie, and raised our 3 pies left from Pie Town Pies. A match was produced in lieu of a candle, happy birthday was belted out of tune, the match was blown out, pie was consumed, and Vince produced shots of Mallort for everyone: a Chicago special, a liquor that is a distilled anise flavor, followed by burnt grapefruit rind, followed by the flavor of smelling salts. Unique, and unfortunately a tradition when camping with Vince.

At the absolutely ungodly hiker hour of 11:00, Prana and I begged for bed. 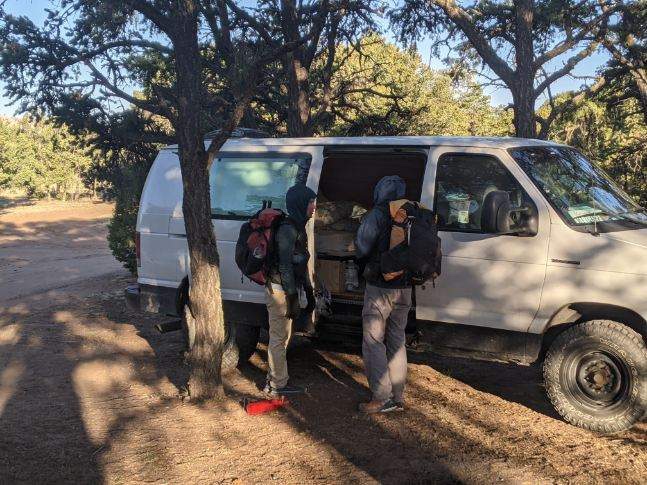 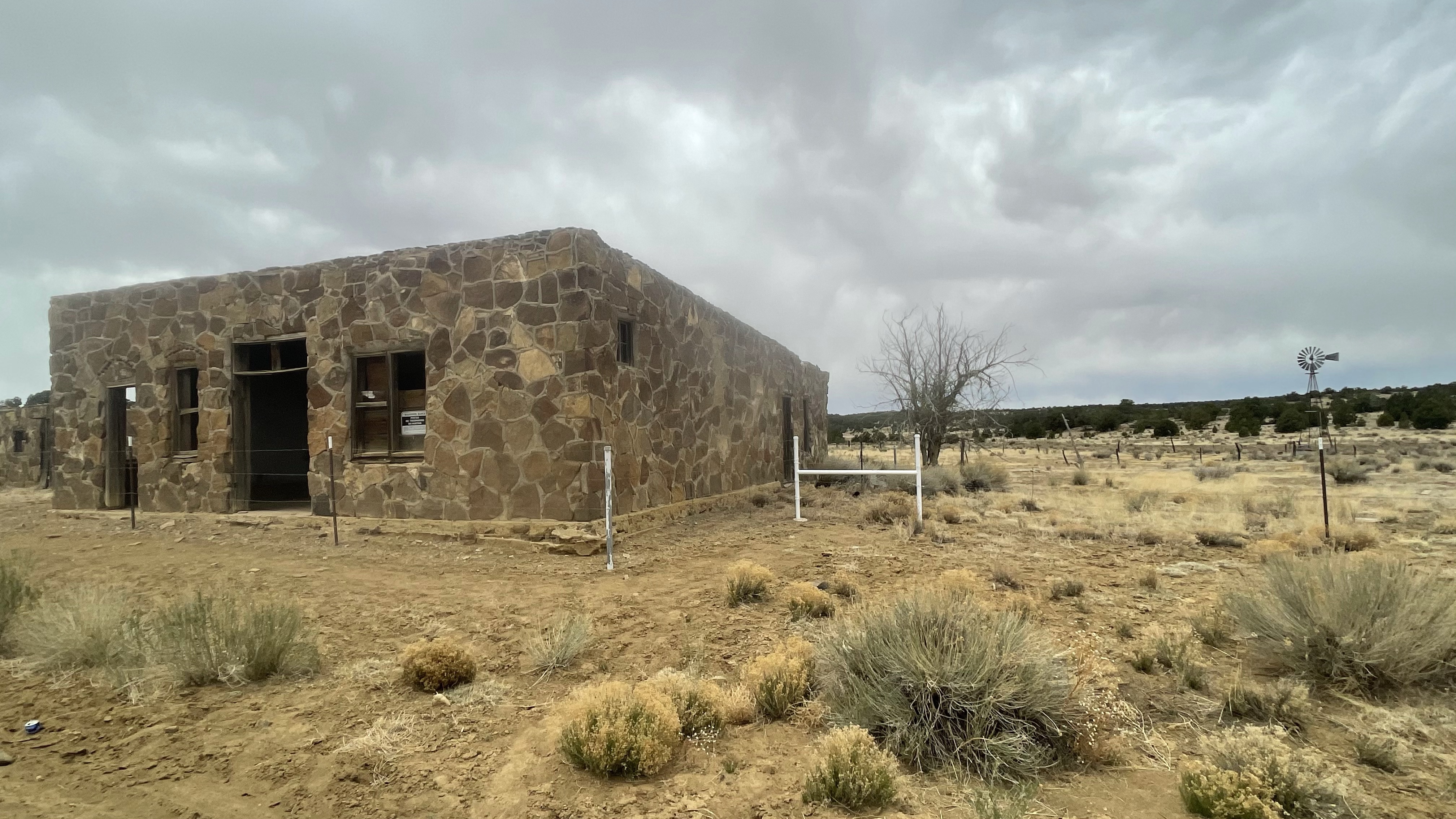