We bid goodbye to the beautiful tree cathedral, and crossed Rio Vallecito on a downed log.

The day was uneventful, though far from unenjoyable. We hiked through aspen and fir and spruce and pine, emerald green grass and rainbows of wildflowers blooming everywhere. We stepped out of the way for about a dozen bicycles, bike-packers with gear strapped to the frames and some wearing backpacks. The trail had plenty of ups and downs and rocks, but was never that slow going: by 11:00 we’d made 11 of our 23 miles.

We filled up at a faucet at the Hopewell campground, (a faucet! no filtering!) and had a seat under the large shelter overlooking the lake. The sky was curdling, thunder grumbling, again- I suppose this was just going to be a theme of Colorado. “Should we take a break? See what the weather does?” asked Prana. “Let’s keep going,” I said, “I hate to pass up this awesome shelter, but I feel pretty motivated today.” Within 5 minutes of leaving, the first icy raindrops splashed down. When it became apparent the storm was moving with us, we pulled on rain jackets.

A couple of hours in the rain, and we ducked into a thick copse of fir, their branches hanging down like umbrellas over dry duff, and set up the stove. Mid-afternoon hot cocoa! The decadence!

“Should we go farther this evening?” I asked. “We’re way ahead of our normal day.” “Yeah,” Prana agreed. “The Rio San Antonio could be nice.”

We watched the water drip from the trees as we sipped the hot chocolate. “Hey,” I said, “have you thought about what your priorities are for this hike? Like, I did the math today, and I can understand why people are taking cutoffs, if the main goal is to definitely finish.” “Well, I don’t want to skip anything just to make it easier,” said Prana. “Yeah,” I said, I would hate to make it to Canada and then just wonder if I could have gone the routes I really wanted to and still made it. I would regret that much much more than taking the routes I wanted, getting slowed down, and not making it to Canada this year.” “I agree,” said Prana, “but I would still want to try to make it. But I would rather not make it exploring the stuff we really want to explore.”

The rain let up, and we took full charge on the trail. The road led up and up, and up, and then into one of the most beautiful aspen forests I have walked through. They grew in dizzying rows, very few trees fallen on the ground, or much underbrush for that matter, other than soft green grass.

As we reached the top of the climb, the forest gave way to meadow, but within that meadow were the biggest aspens, with the most arms, I’d ever seen. I didn’t even realize they could grow like this, sprouting big candelabras.

We turned the ridge and started our descent, into a valley patchworked with golden green meadows, dark conifers, and bright green aspen. My legs were starting to run out of juice, but it didn’t even motter, because it was so early. Down down down to the soggy meadow bottom, where it became apparent there would be no camp; or rather, if we made camp down here we would be soaked and freezing by midnight from the dense humidity and condensation. We picked up a few liters of water and climbed the far bench out, stopping at the first band of trees to find a flat spot. It took some searching, but find one we did, and we pitched camp and cooked an adequate but rather uninspiring dinner of angel hair pasta with olive oil and lots of garlic and sea salt. Well how about that: finally, a day we surpassed our mile goal. 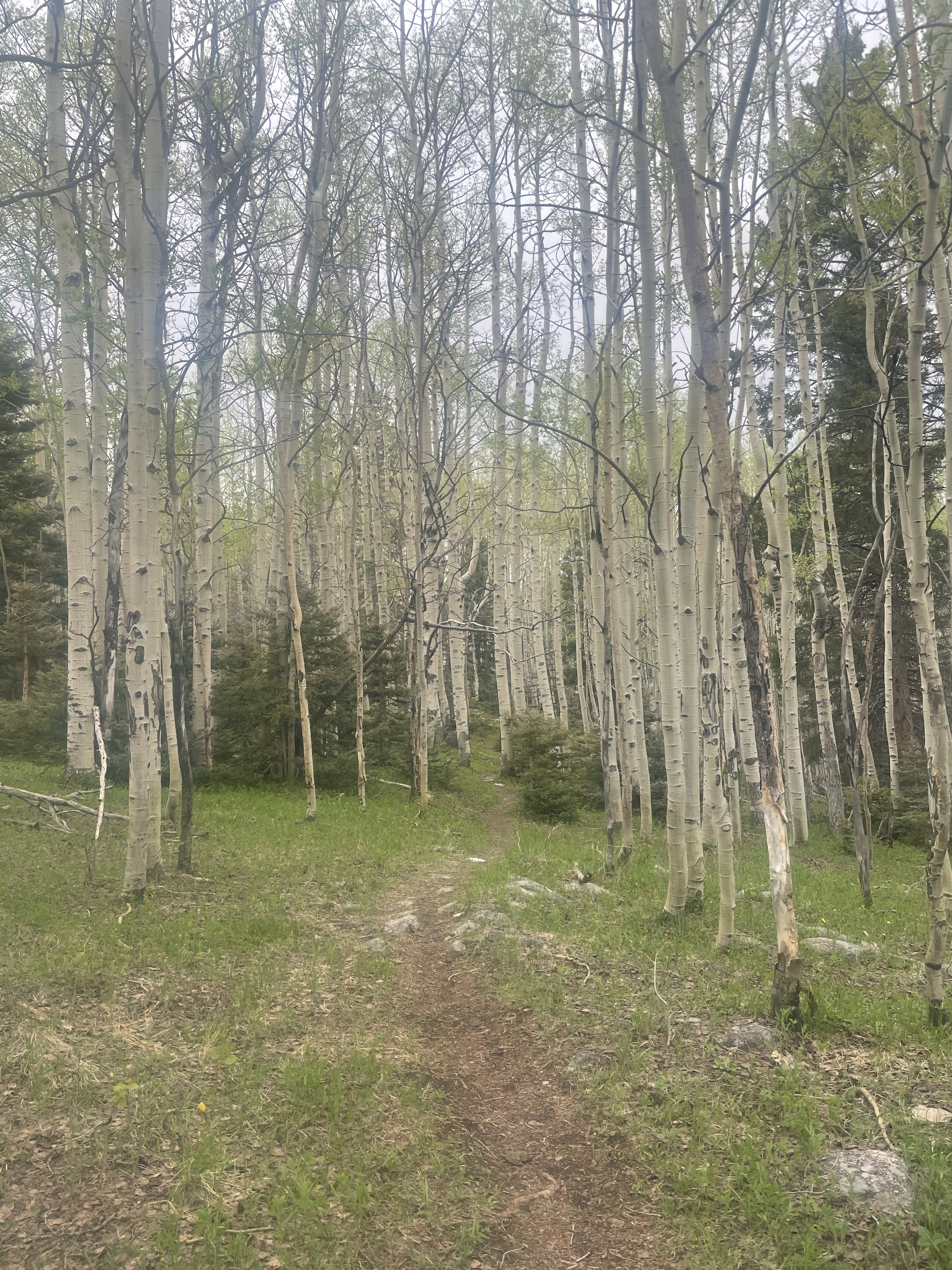