It’s really quite amazing that humans have invented a pressurized aluminum can that we ride in to cross the oceans. In less than a day. 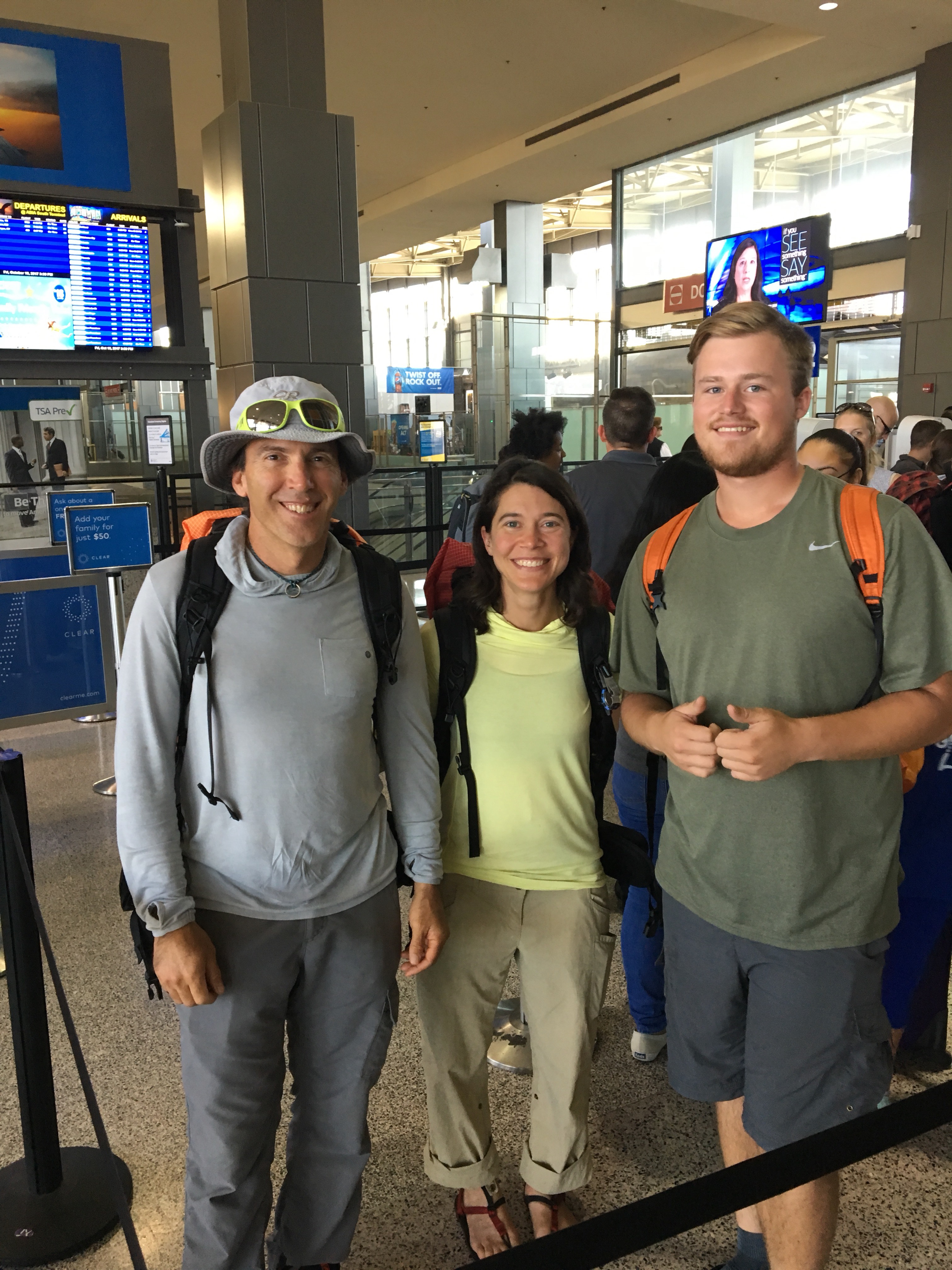 It’s also kind of amazing that they manage to serve you food that’s recognizable as such; not just Matrix gruel, but things like omelet with to-mah-to (that’s how they pronounce it over here), quinoa patties, kale (!). Tiny portions, like playing tea-time with a friend’s 5 year old daughter. Stuffed animal portions. The coffee is terrible, but it’s poured from a French press, so I like to think about Teddy Roosevelt bringing his entire silver tea service on his reconnoiter of the Amazon River while I drink it.

The embarking and flight itself are uneventful. No problems at security. They have desirable movies on board to watch- fo free! We all manage to sleep a decent amount. I make my first NZ friend, whose name is Jemma and who has two pet cows named Tess and Molly. I tell her I know more dogs named Molly than people. (Or cows for that matter.) She says most of the other Jemmas she knows are also dogs. With that bond, we trade emails with the hopes of whitewater rafting together on the crazy off chance we have a layover day near her hometown. The plane lands without crashing.

The one gauntlet left to run: customs. Dah dah duh. We have imagined and reimagined and played out what to do in the event of a massive customs snafu. What if they find a speck of dirt and confiscate all or our camping gear? What if they disapprove of any of our medications, and string us up on the Inquisition racks? What if, in person, they deem our character unsavory and revoke our visa approvals and banish us to build our sub-par characters working in the mines of Moria? Our earnestness must be palpable, as the customs agent we end up with seems benevolently amused (do I claim carrying goods on behalf of another person if we are all sharing a checked duffel bag? would you like to see my prescription for epinephrine? do I claim this feather on my dream catcher as ‘animal parts’?) He waves us through without looking through any bags, either because he wanted to be done with us, or because we seemed too naive to cause much national trouble.

We navigate the airport, buy NZ money (which is beautiful in comparison to the money we trade for it), catch a Skybus into downtown Auckland, and step out into the New Zealand air, which is crisp and cool and humid.

It’s a short walk to the service apartment we are staying at, and after dropping off luggage and asking Matilda at the front desk where her favorite place for breakfast is and receiving a personally annotated street map, we start exploring. We have at least 5 hours to kill before we can possibly check in, so the first order of business is trying the Ugly Bagel Shop. Matilda knows what she’s talking about.

The outdoor seating is decorated with stacks of firewood, and the inside is utilitarian, accented with bright paint. The cashier shouts the orders to the line, which hollers them back in unison; an extremely gentrified call and response work song. A dough wrestler forms bagels from the several hundred pound pile of dough, and lines them up on a long iron shim, which then slides into a giant industrial oven (a bagel forge!). The onions and basil are fresh and pungent. The coffee is strong and delicious and served in a toy sized compostable cup.

We pass under a long dappled row of giant trees reminiscent of sycamores. The second best playground I have ever seen waits the end of the row, second only to the playground at Yucca Valley outside of Joshua Tree NP, and excellent for the same reason; components that easily spin with aggressive velocity.

We cross a cricket green and wander toward the wharf area. Apparently Auckland is known as the City of Sails. We pass through some industrial areas, and rounding one shipping crate, we are delighted. It’s painted with a mural on the inside, and houses a public piano. Parker plays. 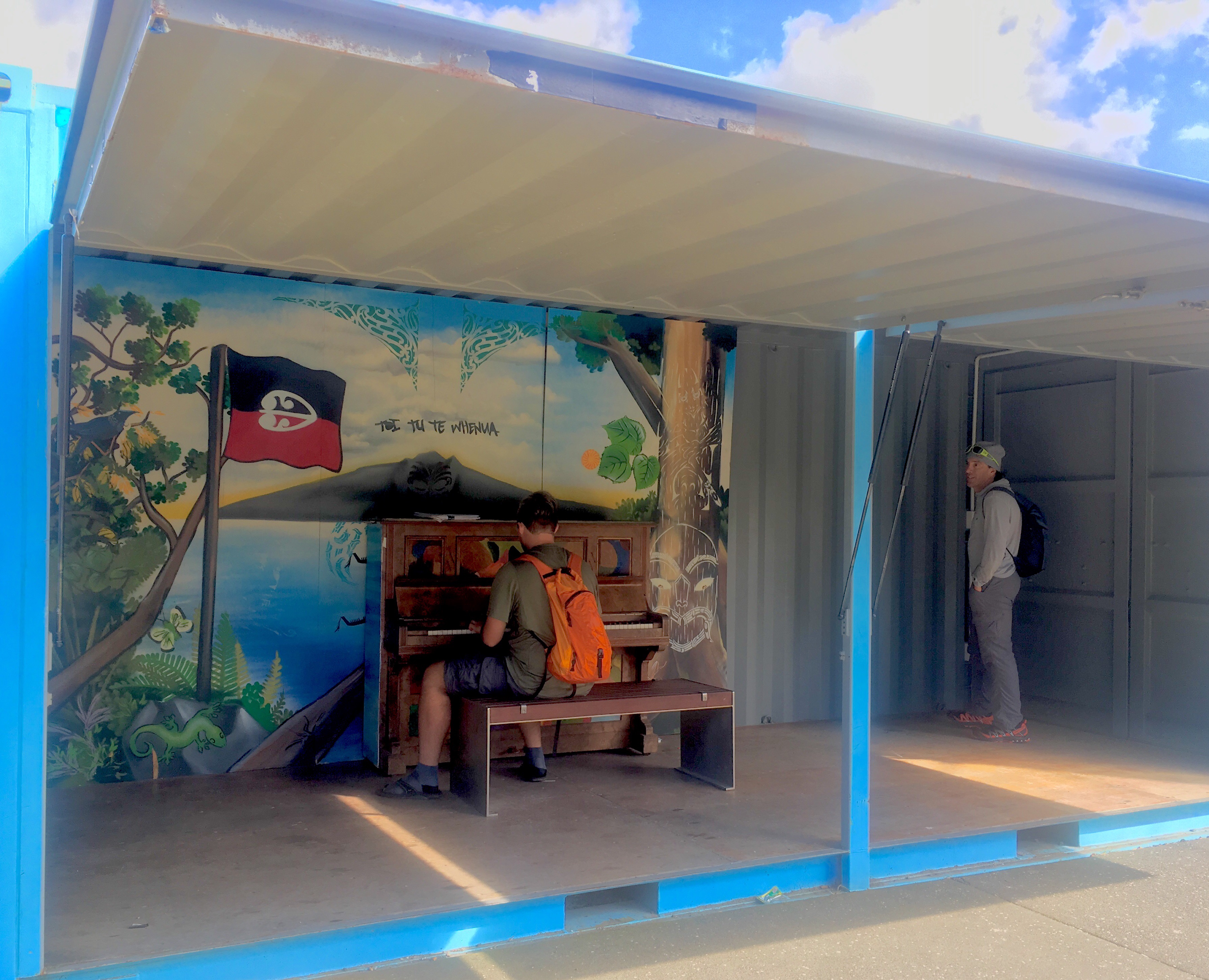 We stroll aimlessly around the docks and look at all the different ships moored at the docks. There are several mega yachts, a dock of historically famous boats that are still in use, and one of the largest sailboats in the world, The Eos, named for the Greek Goddess of the Dawn.

There are more shipping crates that have been converted to Take-a-Book, Leave-a-Book swap libraries, and displays of historical photographs local to the neighborhood. The old and ornate ferry building looms appealingly, and accordion music floats out, optimistic and playful as a calliope. A phalanx of women are handing out roses to promote peace and compassion in the world. These appear through the rest of the afternoon, like stray glitter days after opening a greeting card, laid in buskers’ instrument cases, tucked into condiment holders at outdoor bistro tables, threaded into nooks and crannies lining the walkways. There is color and art and whim all around.

We check in to our service apartment, work on some trail chores, take showers after the plane ride. The day feels excruciatingly late at 4:00pm. There is an Asian market on one side of the apartment building, and an eclectic market on the other, both closet-sized. We scrounge microwave Indian food from both, and wish for non-meat pies. Prana (that’s Tim on-trail) and I sit down to the brain numbing task of folding maps and guide pages, as well as figuring where to drop them for ourselves. Two thirds of the way through it all looks like gibberish- there is an excess of vowels in all the place names. When the last one is quartered and creased, we sleepwalk to bed, at least in this moment indifferent to whether they all will arrive where needed.