The morning arrives after a much warmer night. Our campsite was tucked enough behind a dune to keep the wind at bay. 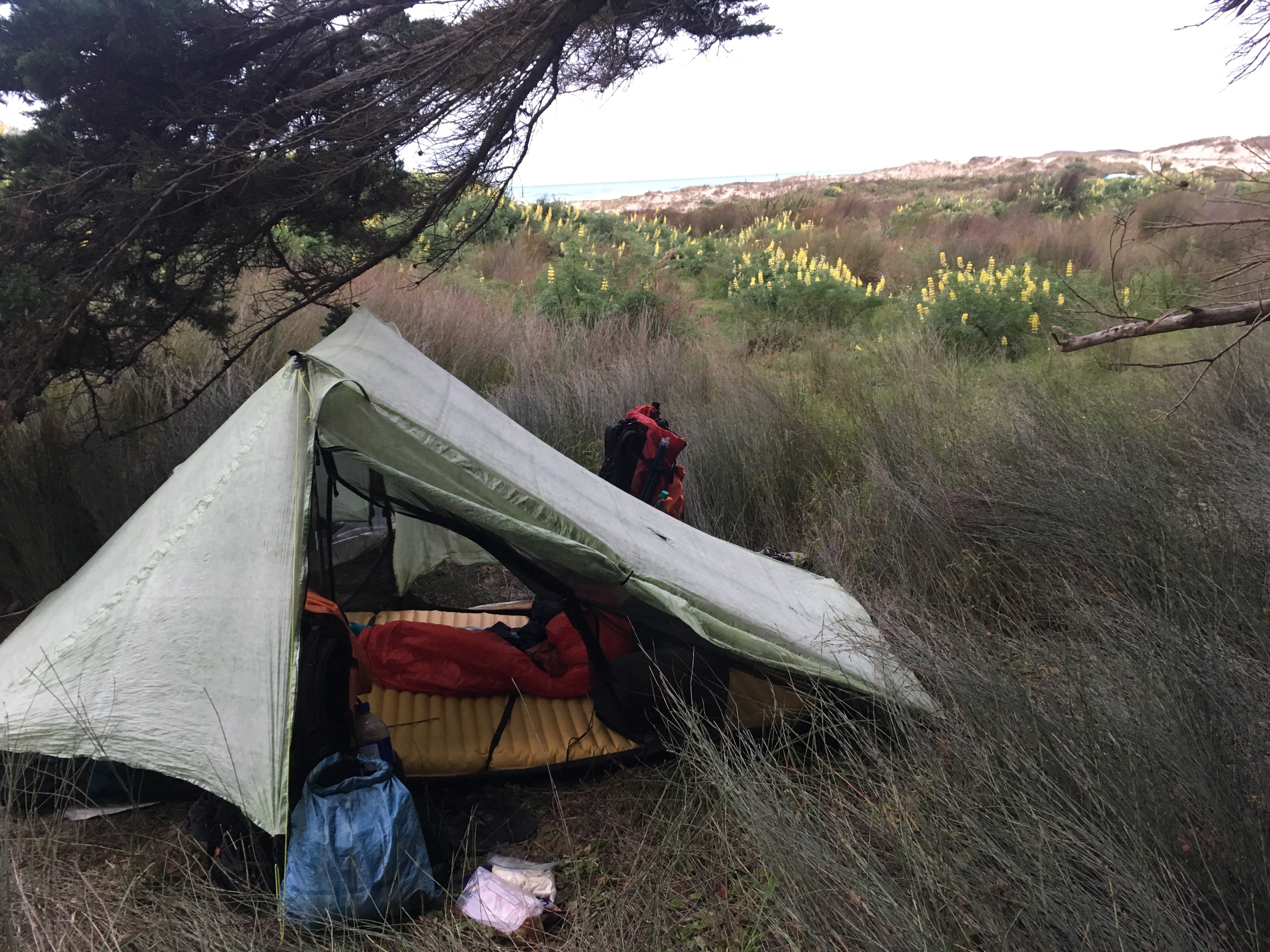 I had an interval the night before when I jerked awake, from what I never discerned, and lay tensely listening to the noises of animals in the woods. The sounds were too small to be horses, but too big to be possums (unless those were some big possums). My thoughts revolve the same circuit – Go to sleep. I need to sleep. Ok, I’m going to pretend to sleep, and my body will fall for it. Wait, what was that?! An animal? Getting close to the tent? Pigs? I can’t tell if it’s closer. I’ll just lift my head for a second so I can hear the direction it’s coming from better. It’s nothing. Damn, now I’m wide awake. Lay your head down! Go to sleep. It’s not like there are bears over here. Or snakes. Or even poison ivy!

This repeated for two hours.

We have breakfast at a little 3 sided windbreak hut with Henry from the Netherlands and Melanie from the UK. Henry reveals that the country is named after the province of Zeeland in Holland from when the Dutch were exploring and colonizing. There is actually a flush toilet here that requires hauling a bucket of water up from the creek and filling the tank to flush. How quaint! Little House in the Sand Dunes.

We re-emerge onto the beach, ready for a long day of walking, our longest yet at 18 miles and change. The wind continues (have I mentioned the wind yet? It’s relentless. But at least it’s consistent, not gusty or changing direction. So for walking it is easy to integrate as part of the three dimensional art I am traveling through, but for breaks it animates anything pulled out of the pack, and transforms any food into an aggressively crunchy treat).

About a third of the way into the day, I come upon three people fishing. Vehicles have been zipping up and down the beach all day, fishing poles two and three times the length of the car strapped to the outside like jousting lances. These three have theirs set up, one man reeling in something silver and flashy. “What are you fishing for?”

“Is that what you caught?” Laughter. “No, this is a ka-ori, and a small one, in’t it? Snaps are much bigger.” He tosses the less-than fish gently back. “Ay, Billie Jo caught a nice snapper, come have a look at it.”

When prompted, Billie Jo holds up a 3 foot long thick and squat bulgey eyed creature, ugly in shape, but more than redeemed by the iridescent rainbow sparkled scales.

The three spent close to an hour showing us their fishing set ups (they use a huge spindly legged weight called a sand anchor to keep the rig consistently placed in the the wave surges) and describing the various fish likely to be caught and how to prepare them.

“The snaps, well you just eat those raw. Or fry em up a bit, or toast a bit over a fire. You can’t go wrong. Same with the king fish. The ka-oris you cut their heads off and let bleed out first, if you’re fussy, that’s the best. The sharks, you can eat, but there’s better eats. When the tide’s out go out and get Tuatuas. Dig your toes in the sand, like this, dig em down, it’s called the Tuatua shuffle. And then you feel the Tuatuas with your feet, and pull em out. Steam those with a bit of lemon is nice , or crack em and eat em raw.”

They gift Parker with a proper hook, sinker, float, and sand anchor set up, to use with the hand reel he purchased in Kaitaia. We thank them for the generosity of their time and spirit, and wish them well. When they pass us in their Jeep later in the day, they hand us a bag of gummy candy, Sour Squirms. I find it delightfully poetic that the fisherman fed us a bag of worms.

The beach goes on, as do our feet. I follow the tide down on its way out and I notice little blowholes in the sand and do a little digging. A clam! I suppose a Tuatua. I cover it back up. I dig again. Another! Larger this time! I cover it up. I dig up another. This one puts up a fight with its foot, digging itself down as fast as I can dig it out. Once I win, I bury it again. Catch and release clamming, I suppose. Mostly I’m delighted there are living creatures under the sand. I dig up and release probably 15 this way, until I accidentally stab my trekking pole right through one. Oh god! The shell is much brittler than I would have guessed. Well, now that I’ve mortally wounded one, I should probably cook it so that it’s not wasted. I carry it over to Prana to confess my sin. He reassures me, then helps me collect 8 more.

We are finally closing in on the destination of the day, Utea Park.

It’s a collection of one room cabins and a large common area, with flat grassy areas sprinkled around. We set up tents next to Simon and Anya, a lovely couple from Germany, who started at the Bay of Spirits and walked a few days around the coast to Cape Reina. (A brilliant idea that I would implement if I could time travel.) William is here too! There is a young black cat whose sole mission in life is to pounce on the air mattresses and scrap, claws out, with the backpack straps, so a big passtime of the evening is relocating her. I’m not sure what to do with the Tuatuas, so William explains/pantomimes the steps (“how lucky there is a Frenchman here to teach us how to cook the seafood!” observes Anya.)

There are enough to cut them in small pieces and share around, some just cooked open, some sautéed in a little in garlic oil we are carrying. They are delicious, albeit a bit sandy. Thus sated, the talk and laughter gradually slows down and everyone drifts off to bed.