Sleeping in the huts seems to mean a late start, and it is no different this morning. I don’t look at the clock until 7:00, and then try to journal while the morning is still quiet, at least until I smell the coffee that someone else is making. Then I must make some too.

We are packed and leaving just before 9:00 and the climb up from the hut is not too bad at all; nicely graded, and the top is the top, rather than the ever-receding optical illusion that many tops are, and then we are coming down the other side. 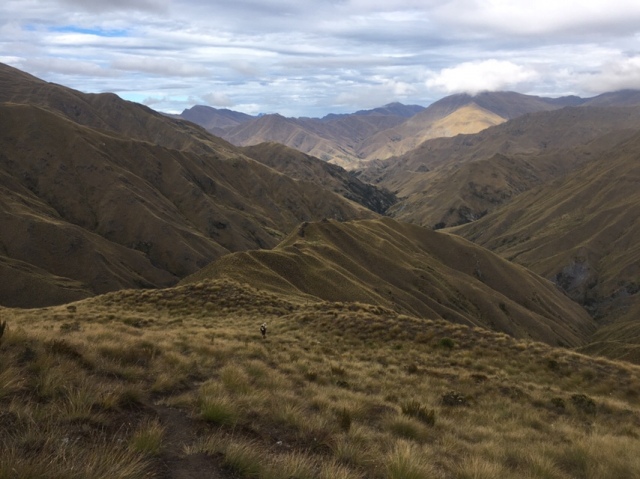 The tread is in great condition, few rocks, nice and wide, not much incline, and I feel so good this morning that I run for short distances, then longer and longer ones. I found myself severely annoyed by three separate people in the hut between last night and this morning, and when I get tired of listening to my mind fume over the encounters, I put on a playlist of 80’s power ballads performed by The Vitamin String Quartet. Queen and New Order and The Cult masquerading as classical music instantly puts me in a better mood, and I accept this as hopeful proof that I am not inherently an asshole, as much as I feel like one for how many people I have already actively disliked today.

I race and bound and miraculously never trip, and Prana joins in the light-footedness on the way down. We descend all the way to the Arrow River, but aren’t sure if this is the spot where we can choose to walk in the river ‘at low flows’ according to the track notes. After some classic up and down sidling on crumbling narrow track, we decide in the river is probably fine from here, and take the next opportunity to cut down to the water.

Whether or not it is quicker becomes irrelevant; walking in the courseway is gorgeous. The water is crystal clear, and anywhere it has any kind of depth, it is tinged the now-familiar icy blue. The rocks are every hue of green, jade, and turquoise imaginable, with black, white, and orange accent rocks in the mix. We work our way across the the water and down the banks, and then more often in the water. The rock walls that the river is bending around become more and more dramatic. It is spectacular. 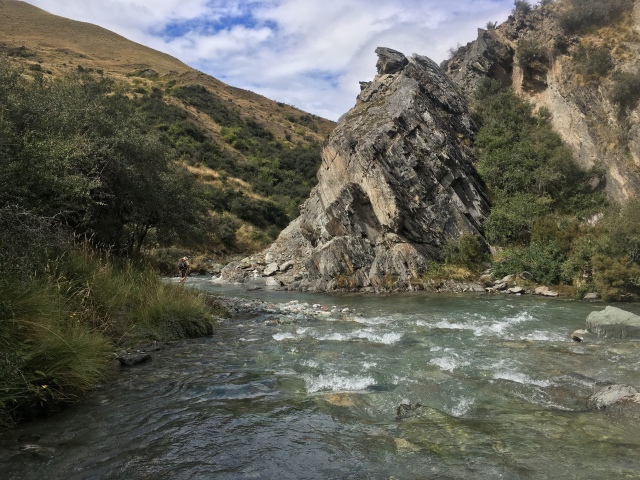 For a few minutes the sun pops out, and I stop to rinse some laundry. Prana finally remembers while we are by a deep enough pool that our mattresses are in need of some repairs again, and as we are inflating them two cyclists appear, pushing their bikes. That’s a surprise. They ask some questions about the track, and Prana describes what it was like, offering his opinion that it would be unpleasant and arduous with a bike. They seem to think there is a four wheel drive road hiding somewhere, though, and keep asking the same questions, searching for the answer they want to hear, and even insisting we show them our maps, as if we had walked on it and are just lying to them for kicks. I get fed up yet again, so so weary of the compulsory interactions that this trail consistently demands, and are glad when they finally go on. Pushing our mattresses underwater, it is a sobering sight when both are streaming bubbles from several square inches of rotten material- no fixing that. I have already called outdoor stores in Queenstown and checked the online catalogs of the major gear suppliers, and no one carries these thermarests. We both refuse to pay several hundred dollars for something we don’t really want, though, so we make a pact to limp these through to the bitter end. Which is not that far off now, anyway.

Packing everything away again, we splash back on down the river. In a little while we reach the dirt road for Macetown, and Mouse, who took the high route the whole way, is already there.

Macetown is a ghost town from the gold mining days, and is full of beautiful maple-like trees. There is surprisingly a hut standing, but it makes more sense when the sign explains it has been restored. It’s the baking hut, and the signs tell the story of the man who ran it, Tily, and the compassion he showed the townspeople who often couldn’t pay when the mining company shorted them on their wages. It’s a touching and intimate insight into the humanity of the former town.

The afternoon sun is hot and in full force, and the four wheel drive track has little shade. There are a few short connecting tracks up high above the side of the creek, presumably so the river doesn’t need to be crossed if it’s too high, and we take one out of mild curiosity.

When we reach the turn for Big Hill, our creatively named second climb of the day, we stop for a much overdue lunch. Now, the problem with late lunch is that we usually have become so hungry we eat whatever we can justify rearranging from its current allocation, which is exactly what we do today. Full and now sleepy from the break in momentum and the heat of the afternoon, we head up for the Big Hill climb.

Despite the name, it’s the most mellow of all the climbs in the section. We are up and overlooking Arrowtown in almost no time, and with a bit of cell service we call around for a place to stay tomorrow night- not much luck. We also attempt to look up more information on a bunch of the side trips we want to do, but I get a headache trying to figure out how the maps connect and which alerts are currently active and put it aside. Hopefully there will be someone that knows the answers, and a massive map that shows it all, somewhere in Queenstown.

We make our way down and pass a great campsite in the trees, but we want to be set up closer to get to town tomorrow, and so forego it. The trail is an obviously well used mountain bike track, making travel easy, and the small bluff and autumn forest combination reminds me achingly of hiking in the Midwest woods back home.

We arrive at the saddle that Prana had in mind from the map, and designate it home for the night. I try to split my attention between journaling and figuring out how to decide what the plan for the next few days will be with so much missing information. There isn’t a place to resupply between the trails we want to do and the next stop on the TA, which means assembling and mailing boxes again; bus timetables don’t line up and mandate extra nights in towns. Still remorseful over how much money we shelled out at Lake Tekapo to wait out the epic storm that wasn’t, I just become frustrated. I really really really dislike how difficult the camping and lodging situation constantly is.

Prana cooks dinner and we crawl into the tent. Unfortunately, it was too short of a day and I have too much energy, and am still wide awake at midnight.