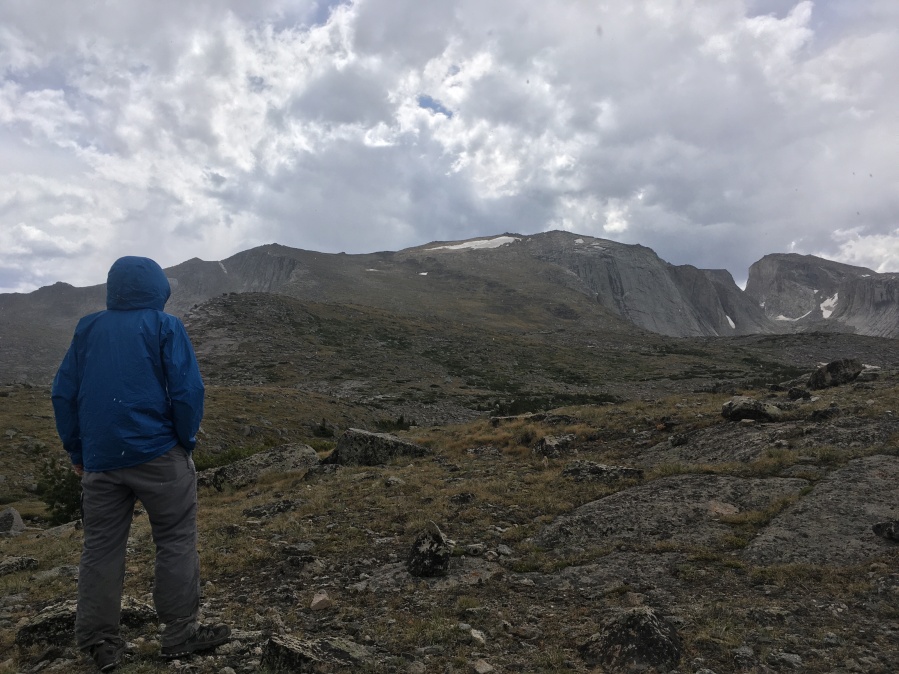 The alarm beeped quietly as color seeped into the pre-dawn sky, only a few stars bright enough to still shine through the gloaming.  Packing up was a quick affair, and we reached the overlook of the charming Popo Agie Falls as the world illuminated.

Shimmering aspens lined the sandy trail, dried underbrush crunched beneath each step.  Dense crystals sparkled in the  granite boulders bulging in the path.  Granola and cold coffee were served on a big granite slab edging the river, pleasantly reminiscent of similar break spots in the Sierra Nevada.  Not long after breakfast the acrid smell of char laced the air and smoked hazed the forest.

“We must be getting close to that fire,” I said.

“I think we’re there,” Prana said.

The trail was smoldering 2 feet in front of him.  Once I noticed that, my eyes picked up more tiny ribbons of smoke puffing from all over the ashen ground, as well as movement in the hazy trees.  4 firefighters were spading, trenching, and carrying water from the creek- the creek less than 30 feet from the trail.

“Is it out?  Or just contained on this side?” we asked them.

“No, we got it out last night.  We’ve just been babysitting it, and will tonight yet too, probably.”

“Thank you!  Thank you so much.  Do you know what started it?”

I couldn’t believe it.  Someone had built a campfire that close to the trail, that close to a creek, and couldn’t even be bothered to douse it completely?

“Well, thanks for your hard work.”

We chatted with them for  a bit.  One had been a smokejumper for 16 years, though didn’t look over 25.  They all loved doing it.  They’d jumped in uphill from the fire to a basecamp in a meadow above.  They’d be packed out on horses the next afternoon, although sometimes had to hike all their own gear out.

Our packs suddenly didn’t seem so heavy after all.

A couple miles past the fire crew, a young hiker was striding towards us, carrying many of the tell-tale pieces of gear that marked him as a distance-coverer.

“Are you hiking the High Route?” Prana asked him.

“Not anymore,” he said.  “I was with a buddy, but it’s too much for my knee.  So I turned around on Wind River Peak.”

“Well, there’s a fire back there on the trail, but the firefighters already have it out.”

“Oh, already?  My buddy’s the one who called it in, yesterday at 4:00- he reported it from his inReach.”

We wished him good travels, and carried on ourselves.  I added this tally to the numbers already milling in my mind.  Only 3 of the numerous trip reports I’d read actually concluded with the author finishing this route, as written, in one go; and one was a trip report by the creator of the route.  Those that adjusted the route or decided to finish early were split between injury-induced and weather-induced, with a few announcing themselves as in over their head before weather or injury could strike.  I’m sure there are plenty others who have completed it and not written trip reports; but of the 3 I’d read of who finished, the creator did it in 4 days; another pair did it 19; and the third trio finished in 9, exhausted and lukewarm on the experience.  None of that is to say taking an alternate constitutes incompletion, or that any of the trip-reporters were unsuccessful; on a trip like this, success is a highly personal, subjective measurement.  It is only to say I had my doubts about Prana and my chances of completing it as we intended- thru, as written, no alternates, no resupplies.  It would take more than a little luck.

The hours unwound past lake after lake. The sky darkened, spit rain, lightened, repeat. Much time was lost to heaving the pack on and off, doffing and donning rain gear in cycle with the fickle sky. The wind gusted erratically, whip-cracking pack-straps and elbowing us around. Finally we neared the Deep Creek Lakes, point of our first cross country embarkment. What greeted us atop the rise was awe-inspiring: huge walls of granite erupted from the ground, and tucked among the petrified swells was Wind River Peak, southernmost 13,000+ foot peak, and our first quest objective.

We departed the saddle at the point our map directed, up steeply through the cold-stunted, wind-twisted krummholz.  We dove into a miniature, tightly woven, woody grotto as another wave of gust-whipped rain hammered through.  Krummholz.  I love these mountain words.  Again, German: translated as ‘twisted wood,’ or its synonym knieholz ‘knee timber,’ these trees and bushes grow dense and tangled instead of up, hunkering together against their environmental odds.  Also, colloquially ‘tuckamore’ in certain areas; an onomatopoeia, perhaps, to describe the exact type of sheltering we were doing at the moment.  When we stepped up onto the ridge to assess the weather, I was stopped in my tracks.

Wind River Peak’s monstrous walls soared above the upper basin, and a deep, narrow V clove the right flank. Most of the vegetation was tiny at this elevation, accentuating the starkness.  The bizarrely geometric ramp which was our route wrapped distinctly up the left flank.  The sky roiled behind.

“The map says there’s a spring partway up the shoulder.  How much stock should we put in that?” Prana asked.

Deciding to gamble in the rain-free window, we scurried around the edge of the lake below us and up the ramp. It was a winning bet; when we dropped our packs in a protected nook, it took us only moments to locate the gushing spring. We filled all our water bottles, and started the game of where can we pitch our tent? The wind gusts grew stronger and more sporadic, and we finally stood in a spot that, while buffeted from the waist up, was comparably still from the waist down- and was just the square footage of our tent.

As we pitched and arranged, the sky behind Wind River Peak blackened, and the first thunder cracked and echoed. Looked like a cooking-in-the-tent kind of evening. Graupel showered down like surf rolling on a beach; thunder snarled and grumbled and growled. Though it was only 5, I was glad to be snug and safe, going to sleep early for an alpine start tomorrow.