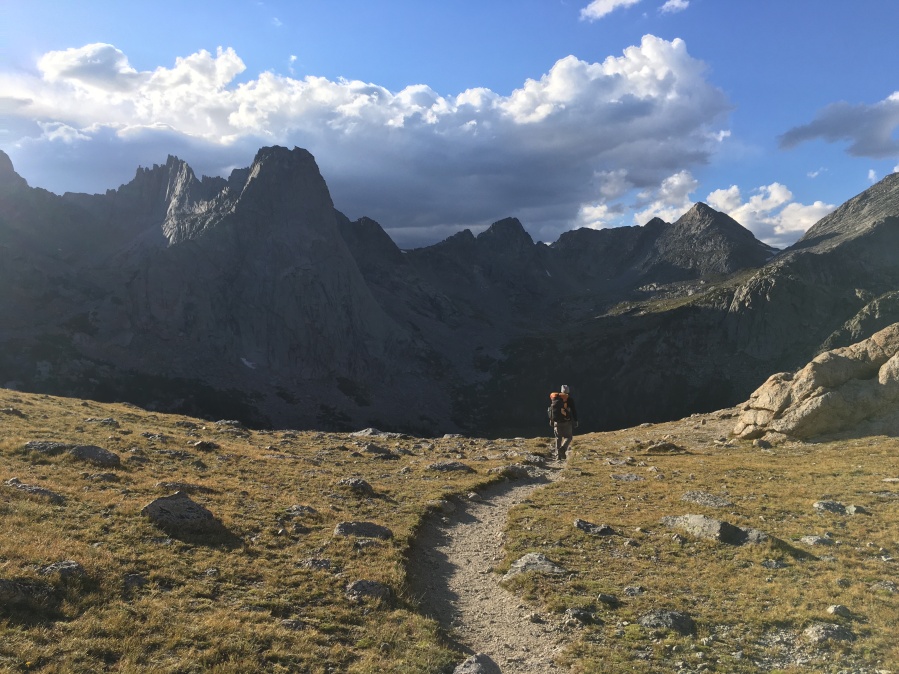 The alarm beeped. I peeked out the tent flap- too dark to tell if clouds sailed in the still-gusty sky, but a rosy stripe glowed on the eastern horizon. Camp was packed and we were hiking the minute it was light enough to see our footing without headlamps. Up up up we climbed, trying to keep as steady a gain as possible on the steepness. I paused for breath often, trying to reframe my tendency to look up and calculate the distance I’d covered since my last breath session (trend: never far this morning). Oh my god, I hope this is the steepest climb on this hike.

Up up up…into the wind.

I finally reached the upper ridge, where Prana was waiting and where I realized, unfathomably, I had not been toiling up Wind River Peak. What was that snowy pyramid rearing in the near distance? My brain didn’t want to accept the fact it could only be my summit – nothing else was higher or equal for miles. I had, in fact, only been toiling up to the saddle that accesses Wind River Peak, toward the equally-unfathomably unidentifiable Chimney Rock. We were on track, on course, by luck: but the formation we’d pegged as our beacon no longer matched the location on the map, now that the expanse of the terrain was apparent- much bigger terrain than my brain had calibrated.

From the saddle we climbed tumbled talus, hopping one boulder at a time. I could no longer see the actual peak, so I just surmounted each ridge as it came…first hump…second hump…third hump…and the third proved the legitimate top! A broad, windy lump of a top, distinguishable only by the fact nothing else was higher. The wind clawed at us as we took pictures; the views were grand, expansive, but I had no concept what any of it meant, or would mean to us, yet. The peaks were simply beautiful faces, strangers in a crowd.

We started down, preparing to face the feature of the High Route I’d dreaded, fretted about the most.  The West Gully.  I’d heard no remotely positive thing about it, with the exception of one trip report: “it wasn’t quite as bad as my overactive imagination had made it.”  To illustrate the margin for error, the exact route down was one of only two lines of precise travel drawn on our mapset; all other datapoints for the entire hundred mile itinerary were just that: points.  Sprinkled at unfixed intervals, garnished with a few words to describe the terrain.

Prana was angling aggressively left, headed for a distinct saddle with a notch on its west edge, though I was sure the contour lines pointed to the right hand cliffs, to enter the gully from the side. I tried to match the contours I was seeing to the map in my hand without falling behind, until I called for a halt, and a scrutiny of our GPS. We were, in fact, way too far left. Backtracking across the ever-steepening slope, the scallops of three potential gullies finally appeared below.

“Which one do you think we go down?” I asked.

“Well, I think we diagonal back all the way to the left, so I vote we stay as high as we can for as long as we can.”

I wasn’t convinced this would yield the easiest travel, but it would definitely make retreat more feasible.  We picked our way down, painstakingly, my adrenaline spiking as the loose rock debris shifted and resettled with every step.  We stopped frequently, balancing on the active erosion to rematch map and land, unsure whether to proceed down the largest chute or cross the next ridge, how sheer it would be on that side.  Finally Prana lined it up.  “There,” he pointed at the map, “and there.”  He pointed at a huge cliff corner farther across the rubble than I thought we were looking for.  “Look how close our line is drawn to this snowfield.”  He was right; while the snowfield no longer reached the cliff (of course), it used to; the way popped out like an optical trick- the bottom of the cliff corner was exactly what we were aiming for.

We stepped and slid, tested and tiptoed, keeping far above the edge in case we needed a buffer for surfing a little rock-alanche.  Closing in on the cliffs, we dumped elevation, riding little gravel slides down to the level where we could search for the bedrock slabs, our Class 3 lifeline to the western valley.  I was certain they’d be the crux of this descent, and at more than two tedious hours in, the novelty was wearing thin.

The first option which looked like it easily accessed the bottom was it.  We almost made it harder on ourselves, thinking the obvious line was too easy, it must dead end; but there were perhaps two class 3 moves, and as a whole the stable slabs were far easier than everything above them.

A gorgeous lake with a rocky island rested in the lower bowl; it felt like a day’s end type of milestone to finally shrug our packs off at its shore.  My neck and scapular muscles were shrieking, stretched taut in a nail on chalkboards rebellion.  Our packs were not unmanageable- but god was I glad they hadn’t been an ounce heavier.  We drank and ate and looked back over our route from this angle, identifying the chute that had looked so promising from above, tracing it down to where it ended in a thousand feet of sheer granite.  We didn’t break long; though it was tempting to reward ourselves, we’d only made a tiny fraction of our slated progress for the day.  We hopped our way around the sparkling, cerulean water, to overlook the realization we had at least as far to descend again, through several levels of talus, to reach the Black Joe Lake.

East Temple Peak, and its equally dramatic, unnamed neighbor, towered proudly as we descended. If I could live without food I would have insisted on camping right there, where I could have a staring contest with these two until the stars crowned them in the dark. But alas; they slowly revolved out of sight behind us. Just above Black Joe Lake a wide game trail appeared, and despite my skepticism, maintained its clarity along almost the entire edge. The wind howled through and sideways rain pelted; whitecaps foamed as we kept our hoods clamped tight and concentrated on keeping our momentum.

I was beginning to feel optimistic about reaching our destination; the end of the long lake in sight, where we would pick up easy, maintained trail, and practically fly, I imagined, to the night’s camp.  Until our magical non-trail vanished at the edge of a perplexing cliff.

We bushwhacked, scrambled, and finally legitimately climbed.  We couldn’t figure out what we had missed, but after a whole lot of circular effort, we stumbled on a big wide tread that led through a grassy ledge in the formation, through a hanging meadow choked with flowers, and down a there-if-you-know-to-look-for-it ramp, to the remains of an old wooden dam and the trail.

The maintained trail was as good as I’d hoped, and we made fabulous time; although my left ankle, for unknown reasons, was flaring with pain. I can’t pinpoint when it happened (years ago) but some kind of structural compromise has made it insanely sensitive under prolonged exertion: it doesn’t give out, but once I’m several hours in, if I slightly bump or graze the inner bony knob on anything, it echoes through my entire body like a mortal stabbing. It’s as endearing as it sounds, and after rolling several rocks onto it during the West Gully descent, it was swollen.

At Big Sandy Lake we veered north, picking up our trail and beginning to climb steeply, again, though this time on trail.  My screaming shoulders, knotted neck, throbbing ankle, gasping lungs, hammering heart…I felt like garbage.  While Prana light-footed ahead like a mountain-mammal, I just reminded myself it was only a function of time; as long as I kept moving, I would eventually get where I was going.  Eventually.

I caught my first tiny glimpse of the Cirque of the Towers- an elegant, romantic name which had always held my curiosity. The sky was working itself into a dark frenzy, the clouds pacing and muttering to themselves. We dove into a strategic boulder cave (how did we keep finding these at the perfect moment, every time?!) as a relentless wind drove a stampede of hail through; I was just happy for the excuse for a break. My nose ran from (I assumed) exertion and the cold wind; when I wiped with my shirtsleeve, it came away soaked with bright red. Oh my god- my body is falling apart like the Bluesmobile.

Down to Arrowhead Lake, a lovely basin in its own right, and then up Jackass Pass. At a fork in the trail we chose the climber’s route, down to the left instead of up to the right, hoping it would feature less people. It wound through well-settled, perfectly-cairned talus, a curated, sanitized sample of the bulk of our day. It was no less crowded, though, and when Prana hopped off a large boulder near the end, a dog being unsuccessfully coaxed through lost its mind, snarling barking growling rushing lunging for his arm. The dog’s person, commendably, scrambled for the dog, grabbed it, and loudly chastised it. “I’m so sorry,” she said. “He hasn’t done that at all today.”

How does one respond to that?  As in, wow, it was all the way yesterday since he attacked somebody?  I’ve got to give the little credit that’s due, though; she hadn’t tried the ‘oh, don’t worry, he’s friendly’ approach of indifference, which has recently ascended the ranks to become one of my greatest peeves.

“No,” he said, “he shoved his mouth against my hand and my thigh, but didn’t actually bite.”

“You’re lucky I didn’t have the bear spray.”

He dismissed my mood with a wave of his hand.  “It’s fine.  It ended fine.”

As we crested Jackass Pass, the wind became a tempest.  The late, clouded hour backlit The Cirque of the Towers, forming a crucible of shadows.  Even the outline, though, was incredible to behold: a truly quest-worthy destination.

Into the Cirque we switchbacked, on pebbles of quartzite; and when it came time to choose camp, Prana had the energy to waffle.  I, however, did not.  We searched off to the left, found spots either mostly flat, or mostly out of the wind.  Finally I just sprawled dramatically in the spot that was the least undesirable.

“In approximately 3 minutes I’m emptying my pack right here,” I said petulantly into the wind. My feet throbbed. My ankle twanged. I could fall asleep right now, without the tent, without dinner. I was on empty.

Prana scouted a few more spots, and I propped myself on my elbows, considering Warbonnet Peak and her Warriors.  My vision swam, my head pounded, and I realized I hadn’t drank nearly enough water today; or eaten enough, for that matter.

Gallant Prana set up the tent, filtered the water- basically did all the chores- while I cooked and grumped.  Chewing food was pure drudgery, but eating was the only way the packs would get any lighter; so I dutifully chewed, forced down several liters of water, crawled into the tent, and instantly konked out.